A tentative schedule will be posted in April. We are now practicing our music to bring you the most enjoyable concert experience.
Posted by Red Lion Felton Band No comments: 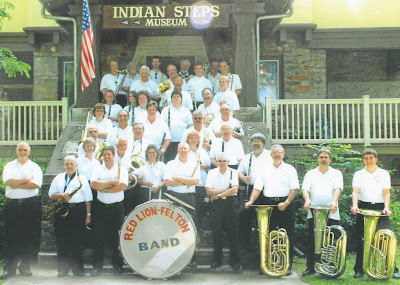 
Daniel P. Keener and Alvin M. Hildebrand organized the Red Lion Concert Band July 4, 1932. A small German band, organized some four or five years prior to 1932, was the forerunner of this band. Alvin Hildebrand was the band's first director.

The Felton Band was established in 1892 and incorporated on February 20, 1893. Mr. William G. Reichard was this band's first director. The Red Lion Concert Band and the Felton Band merged to become the Red Lion Felton Band in April 1972.

Together, the Red Lion Felton Bands have been entertaining Pennsylvania, Maryland, New Jersey and Delaware residents for over 128 years. The band is currently under the direction of Alisha Miller and John Kuehl.

The business manager for the Red Lion Felton Band is Mr. Ronald Anstine.